skip to main | skip to sidebar

The Myth From Hell
There is a popular myth that lifestyle change—eating clean, a new exercise program, quitting smoking, cutting down on your bank robbery habit, whatever—comes from feeling inspired or “motivated.” Hence, when people “fall off the wagon” of their new whatever-it-is, they say things like, “I just couldn’t stay motivated.”

There Is No Viagra For Inspiration
They may try to huff and puff to keep their motivation pumped up, listening to inspirational speakers, pasting affirmations up around their house (which invariably end up looking depressing and forlorn after a few weeks), all the usual suspects by which people try to “hype themselves” into sticking with some new program.

But the truth goes like this: The only reason loss of inspiration is an issue is because we make it one. It's just some bad education that's become a habit. It's superstition, really: a self-fulfilling prophecy. A sort of spell we're under. We think lack of inspiration is the death knell, and so it becomes. We have linked the two, like Pavlov’s dogs linking the bell and the food.

The Mighty Super Power of Indifference
One group of people who typically don’t make this mistake are professional creators. The artists, inventors, composers. They’ve learned a simple but powerful art: the art of not giving a damn what their fickle emotions are up to. Robert Fritz is an author and thought leader who’s spent his life studying and teaching about this stuff (I’ve studied with him and used his concepts in my nutritional coaching work for years). 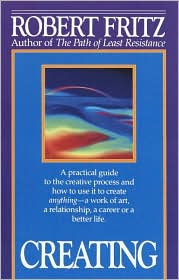 Structural Tension 101
First: Acute awareness of your current reality (i.e. “I eat fresh veggies 3 to 5 times per week, I eat refined flour products X times per week, I have such and such health issues, fatigue, headaches…” and so on).

Second: A vision of what you choose to create. A result or outcome (i.e. a radiantly healthy diet, vibrant health, boundless energy, no chronic degenerative issues at all, youthful appearance, slim, lithe, whatever). The point of the vision is not to “inspire you,” to manipulate your emotions or anything else. It’s just to guide and direct your actions.

Between these two—your awareness of your current reality and your vision of your creation—you will feel a tension, a disharmony, a dissonance that seems to compel resolution. It’s a little uncomfortable. That is Structural Tension. Creators simply know how to stay in that tension, to tolerate it. To use it. Most people, however, spend their time getting OUT of that tension. They do that either by watering down their awareness of current reality (denial, minimizing, kidding themselves) or by watering down their vision (compromising). Either one will reduce the discomfort of Structural Tension. But, if you don’t water down either; if you instead STAY in the dissonance of Structural Tension, it MUST resolve in the direction of your creation. How cool is that?

Willpower & Self-Discipline Suck
People (such as the creators Fritz talks about) who have learned this, look, to you and me, like people who simply have some steely magical gift called “willpower” or “self-discipline.” But it’s really just that they’ve learned to rely on Structural Tension instead of emotional motivation or inspiration. Willpower and self-discipline are when someone just grits their teeth, sets their jaw, hardens their resolve and makes themselves do stuff they don’t wanna do. Structural Tension is much easier and more natural. You’re just plugging into the Way of Things! It’s like going along with a strong current in the water and steering it the way you want.

Willpower and self-discipline are what people use to “solve problems.” Structural Tension is what creators use to bring something cool into existence. They don’t bully their way through the obstacles or resistances . They just don’t pay a ton of energy and attention to them. Instead of “making themselves do stuff they don’t want,” they’re doing stuff they do want, because they’re operating from a deeper, more dynamic and resilient kind of wanting. It’s the kind of wanting that is unique to the creative orientation. It’s more playful, agile and artful.

Start Making Cool Stuff (Including New Lifestyle Changes)
We can make that same shift. Anyone can learn it. Usually it’s simply that nobody’s ever told us that, when we notice our inspiration is gone, we can just shrug and continue creating whatever it is we’re creating. We just have an old, dumbass habit of thinking that feeling unmotivated is a problem. Like I said, it’s superstition.

Once you start to get the hang of this way of doing things, using Structural Tension, you get better and better at it. You get stronger with practice. It develops, like a muscle. The muscle is indifference to the “weather patterns” of your emotions, and focusing, instead, on Structural Tension (current reality plus the vision or outcome you’re choosing to create). This is what Robert Fritz calls the path of least resistance (it's also the title of his first book—it rocks!). I highly recommend using it in every area of your life, including transforming how you eat.

I’d love to hear your thoughts on these ideas! Do you tend to think a loss of inspiration is a problem? Or do you tend naturally toward this creative orientation? Do let me know!
Posted by mark at 5:46 AM

Hey Kelly! Yeah, I love it, too. Robert Fritz SO rocks the house. He's da bomb. I totally dig how he emphasizes that creating (and structural tension) is NOT "problem solving." Thanks for your comment!

Have you made some changes? Those apples look delish! I would love for you to contribute to my blog. If you are interested put your name, website and a 3-4 sentence tip on there and email to kowellness@gmail.com

I'm a diet transformation coach and certified counselor of natural health. This blog is a place for giving out tips, secrets, hints and all my latest thoughts on creating the lifestyle of mega-healthy eating. Welcome!

Visit my site and sign up for my free monthly newsletter here!